“Going to university was not in my plan,” Weimin (George) Yuan recalled in a recent interview. He was born in Shanghai, and when he emigrated to Hong Kong with his family in the early 1950s, at age 12, he didn’t speak Cantonese or English. That left him trying to catch up to his classmates during his first years at the renowned Diocesan Boys School (DBS) in Hong Kong. Even though he became a good student, he did not plan to continue his studies after DBS “as my parents were not in a position financially to support higher education.” Yet his DBS headmaster encouraged him to apply for a United Board scholarship for undergraduate education at International Christian University (ICU) in Japan, and to his surprise he was named one of the recipients.

“The United Board scholarship to attend ICU totally changed my life,” Mr. Yuan said. He had received a colonial education in British Hong Kong, so the atmosphere he encountered on the ICU campus in the fall of 1960 was a new world. He found an active student movement on campus, with Japanese classmates keen to debate the country’s future. ICU was proactive in promoting international understanding and multiculturalism, both in terms of its international student body and faculty and its outreach to Taiwan, Korea, and other parts of the region “ICU had a profound influence on me, with its emphasis on peace, understanding, and respect,” he said. It stimulated his interest in Asian languages and cultures, which led him to graduate studies at Yonsei University and Harvard University. 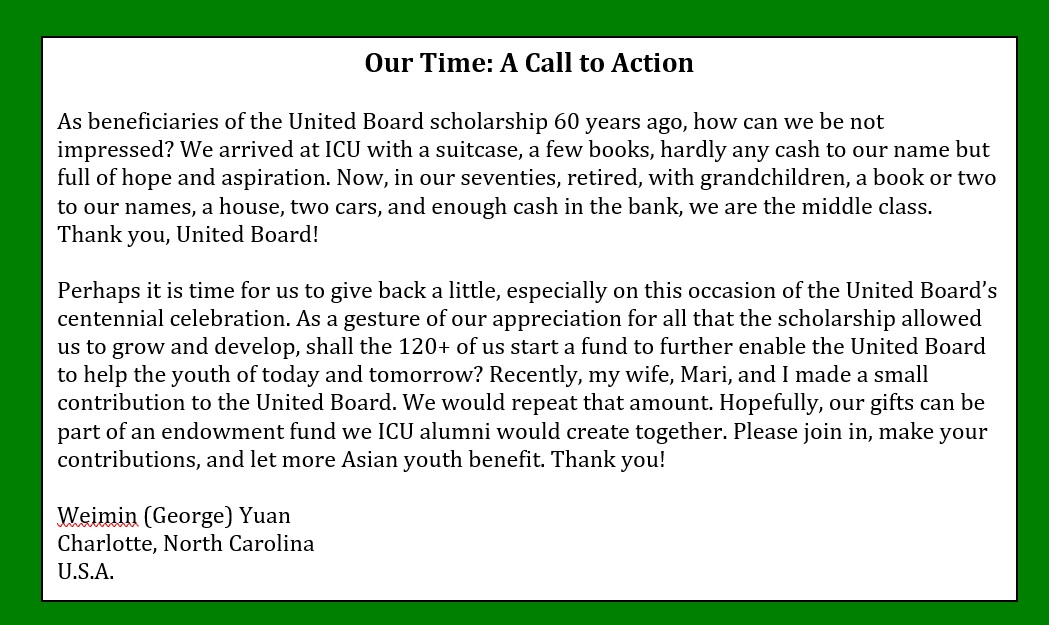